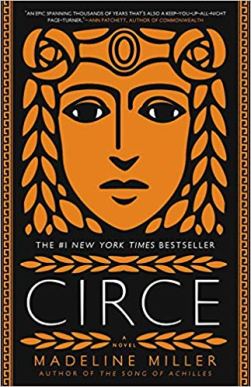 Blurb (from GoodReads): In the house of Helios, god of the sun and mightiest of the Titans, a daughter is born. But Circe is a strange child—not powerful, like her father, nor viciously alluring like her mother. Turning to the world of mortals for companionship, she discovers that she does possess power—the power of witchcraft, which can transform rivals into monsters and menace the gods themselves.

Threatened, Zeus banishes her to a deserted island, where she hones her occult craft, tames wild beasts and crosses paths with many of the most famous figures in all of mythology, including the Minotaur, Daedalus and his doomed son Icarus, the murderous Medea, and, of course, wily Odysseus….To protect what she loves most, Circe must summon all her strength and choose, once and for all, whether she belongs with the gods she is born from, or the mortals she has come to love.

This may very well be the last book I have time to finish this year, and I am not sad for it. This book deserves all the praise that has been heaped on it, and I have to admit, I was pretty skeptical.

There aren’t any words I could say to do it justice. The blurb doesn’t do it any justice at all because it was the blurb that put me off it for so long. Truthfully- it just seemed boring.

It’s not. This isn’t so much a retelling of Homer’s The Odyssey, (though in some ways it is) but a saga of Circe, the least loved of all the gods, the least powerful, the least pretty, the least wanted. Time and time again she is thrown low and overcomes it. That is not to say she is without faults- she is far from perfect. But by the end of it, regardless of what she may have done, you can’t help but cheer for her.

The writing is lush and beautiful.  It is everything I would have wanted from a Greek retelling.  It has a sweep-you-away quality that just makes you feel like you’re sitting by a roaring fire on a cold winter night listen to your grandmother tell stories of her childhood.

The characters were also fantastic.  Circe was my favorite and a lot of that is due to the time we spend with her.  Other characters flit in and out of Circe’s life, and they all have their own voices and characterizations, but it is harder to connect with them since they might have only a few chapters they were involved in.

Aside from Circe, there is plenty of other greek mythology to go around. There is the birth of the minotaur, Icarus, who flew too close to the sun, Jason and the Argonauts and the golden fleece and his wife, the witch, Medea. There is story upon story upon story, all beautifully and carefully told. Many of them were easily recognizable and they all brought a smile to my face.

I have been hesitant to try Miller’s The Song of Achilles because I enjoyed The Silence of the Girls so much, but now it’s become a must-read.  If you have ever enjoyed any Greek tale at all- pick this up. You will not be disappointed.

2 thoughts on “Circe by Madeline Miller”