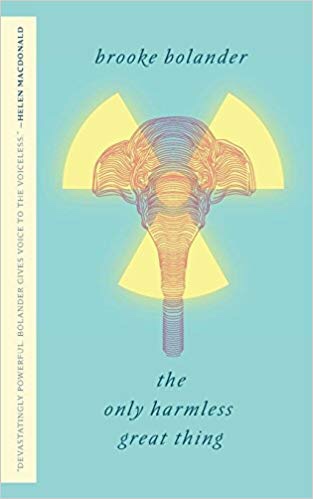 I received this for free as part of Tor.com’s free ebook of the month club. I wasn’t terribly excited about it when I saw it. But free is free and it was quick so I took a chance, and I’m so glad I did!

First- content warnings, because this isn’t an easy book to stomach: animal abuse and torture, graphic depictions of radiation poisoning.

I started this and admittedly had no idea what was going on. I thought it was pretty weird the story was being told by an elephant (humans have their parts, but it starts with the elephant). I didn’t really understand elephant culture other at first- there was a learning curve. What I eventually worked out was that elephants are a matriarchal society and stories, kept “orally”, are sacred. By 50% or so I adjusted to the elephant POV and that was where the story took off for me. To be honest- I also didn’t know much about the Radium Girls. I had heard of them, but I have no idea why or what they did. I think that was half the point.

I’ve read a few friend reviews and I think the beauty in this story is that it seems everyone took something different from it. For me, I felt it was about the power of story in our lives, how truth can be manipulated, twisted, and bent, how truth can be buried. How the treatment of one story can mean the “characters” fade into obscurity or sky rocket into fame. How that story will affect future generations.

“No matter what you did, forty or fifty or a hundred years passed and everything became a narrative to be toyed with, masters of media alchemy splitting the truth’s nucleus into a ricocheting cascade reaction of diverging alternate realities.”

I found this particular message very powerful and so, so relevant, but there were also snippets of other messages I found really moving. The power of corporate America. Business and commerce rule all. Anyone will turn a blind eye to anything so long as there is food on the table. I think it would make for a fantastic read with friends or clubs because discussion really could be endless here.

Aside from that the voice and the writing here were superb. We have three pretty distinct voices, Regan, a Radium Girl, a poor southern farm girl with little education, Furmother, the most clever of all elephant mothers, and Kat, the scientist who wants to “help” and sees value in truth. I highlighted so many things in this tiny book. The tone and setting were dark and grim, yet she managed to maintain a note of dry (and admittedly dark) humor through out.

I only deducted a star because as I mentioned above- the book was really hard to read. I don’t really have triggers, but I certainly find some things more difficult to read than others, animal abuse and slow death are two of those things for me.

All in all- the book can be read in a day and I highly recommend taking the time. It’s well worth it. Thanks to Tor.com for putting it on my shelf.

“…Her execution will amount to nothing more than a pitiful sentence in a history book swollen tick-tight with so many injustices the poisoning of a factory full of girls and the mean public death of a small god don’t even register as particularly noteworthy.”