Just dropping a quick review in here today.  It’s a graphic novel so I tend to have less to say about those.  I’ve read Brian Vaughan before and I like him quite a bit.  (I read the entire Y: The Last Man series last year and loved it.) 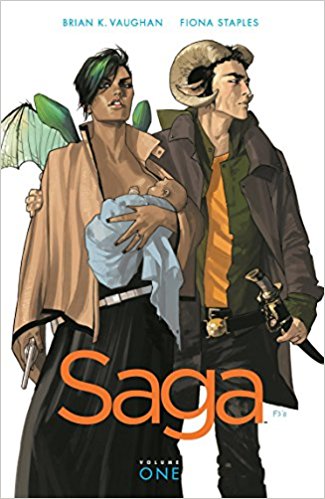 This was pretty good and not at all what I expected. Judging by the cover I had expected something more along the lines of fantasy and instead I got a blend of Science Fiction and Fantasy.

The plot is pretty straightforward. Alana and Marko once fought on opposite sides of the war, but they fell in love and defected and are now starting a family. Now both sides want them dead and the baby alive. We follow both them, Prince Robot IV (whose name cracks me up) as he chases them, and another bounty hunter (called freelancer in the book), The Will, as he chases them also.

I loved the different races that were introduced. The Stalker was super cool. I’m also really intrigued by The Will and his story line. He’s a guy with shades of gray even though he’s pretty obviously an antagonist in this book. Alana and Marko’s banter was great and I love that Hazel narrates some scenes.

I do wish we’d been given more information about the war. It just didn’t really make sense to me why the two sides were fighting. One lived on the planet and the other lived on the moon, but it doesn’t sound like they were fighting over resources or anything. It’s just: there was a war and then it started destroying people so they moved it off planet.

Anyway- the art work was pretty cool and I’ll definitely continue with the series.