I know this is a considered a classic, especially of the Science Fiction and Horror genre, so this review is probably not going to contribute much to your understanding of it, but I wanted to post it anyway because I do think it’s a book worth discussing.  Especially if it’s a classic you might have skipped! 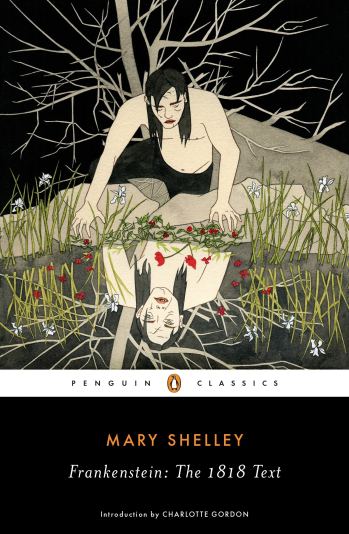 “…How dangerous is the acquirement of knowledge, and how much happier that man is who believes his native town to be the world, than he who aspires to become greater than his nature will allow.”

I wasn’t expecting much from Frankenstein. Not only have I not had the kind of patience classics sometimes require, but the story of Frankenstein is one so familiar I thought I might be bored.

I was wrong on both counts. While this certainly isn’t the most exciting or fast paced novel, it’s much shorter than most other classics I’ve read and there aren’t (m)any side plots to contend with. As for the story itself- turns out all I really knew was there was a mad scientist who brought to life a human like creature.

I love Shelley’s description and imagery. There were a couple places where she was describing Frankenstein waking up in the woods in spring and listening to the song birds, and another page where Victor was adrift on an ice float in the arctic and the waves tossed him about. It was both vivid and metaphoric.

I also appreciated the language Shelley used. It’s very concise for the times and I didn’t find myself re-reading overly long sentences to try and vaguely grasp their meaning.

“I have devoted my creator, the select specimen of all that is worthy of love and admiration among men, to misery…”

But most of what I enjoyed about this was that there are so many ways to interpret it. In the back of my book there was even a fascinating section about the many ways to read and interpret Frankenstein. Biographical, feminist, an exploration of the nature of man and his relationship to god… I find myself considering and reconsidering passages.

Particularly what resonated most with me was the nature of the relationship between Frankenstein and the creature.  It was perhaps a rather blunt way of discussing the nature of man’s relationship to God.  Frankenstein made him, but the creature becomes his master.  He blames all his misfortunes on Frankenstein and holds him responsible.  The ending in particular was fairly moving.  After having read the book, and conducting a little research on Shelley, it is worth noting that her husband was a suspected atheist, and I have to wonder if there isn’t a fair bit of scorn within the book for the way Shelley feels people interact with their creator.

All in all, a quick read that is well worth checking out.

“He was soon borne away by the waves, and lost in darkness and distance.”

2 thoughts on “Book Review: Frankenstein: The 1818 Text, by Mary Shelley”