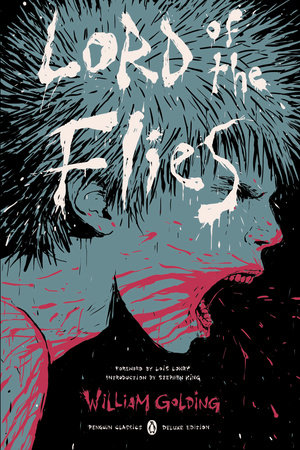 Lord of the Flies is an example of what might happen when boys are isolated without adult supervision for an extended period of time.  I read the deluxe edition in which Stephen King wrote a wonderful intro.  The book’s influence on King, one of my favorite authors, was obvious right from the beginning.  Their styles and the element of supernatural happenings all felt incredibly familiar (in a good way).

I can also see how this book inspired the many other fantasy dystopians that came later.  It felt like a prototype for The Hunger Games and Red Rising.  What happens when we are reduced to our basest selves?  Who do we become?  What is necessary for group survival?  Would you change yourself to become a part of that group and what does it say about you?

There is a lot of ominous foreshadowing, and the symbolism goes on for days, but in the end, I just wasn’t all that entertained or even shocked by it.  It gets off to a very slow start, with nothing really terrible happening until halfway through.  And then when things start happening, they really aren’t all that shocking.

I’m sure it was shocking in 1954.  But that’s where the book dates itself.  If you’ve read anything by Stephen King.. there’s really not much to see here.  I don’t want to say it’s not graphic, because it is, but Golding also manages to dance wonderfully around specific actions.  There’s no doubt in your mind about what’s happening, but the how of it is vague.  For example the scene with the mother pig… I had to read in one of the essays at the back what Golding was trying to tell me.  I knew what was happening- the boys were killing her with their spears- but not where the spears were going.

I just think scenes like that are more powerful when they’re direct.  Make me cringe, make me look away, force me to put the book down for a few minutes because I need a break.  Instead, I kind of shrugged, said “poor momma piggie” and moved on with my day.  The essay at that back?  Yeah, that made me cringe.

Anyway- I’m glad I read it, and I didn’t find it to be a difficult read at all (which I always worry about with classics).  But if Lord of the Flies is not something that interests you for its literary importance, it’s pretty safe to skip.  It’s been done better in more recent years.  If you do decide to pick it up- I highly recommend the deluxe edition.  I got a lot more out of it with the intros and extra texts.

Lord of the Flies can be found on GoodReads and Amazon.

35 thoughts on “Book Review: Lord of the Flies by William Golding”