I first heard about this fun Norse themed readathon from Nicole @ Book Wyrm Knits (thank you!).  I have a hard time resisting anything Norse themed, so I decided to play along too.

This readathon is hosted by Foxes and Fairy Tales, and if you’d like to join in, please check out the information and sign up thread here.

If it can be added on Goodreads, it counts — novellas, graphic novels, audiobooks etc. are all fair game.

One book per square.

Your TBR can change over the course of the readathon.

There are a couple of different ways to play: it’s entirely up to you! Get a five-in-a-row bingo line, tackle the Nine World prompts in the centre (blue) or challenge the gods around the outside (yellow). This should mean you can increase or decrease how challenging you make your month.

I don’t have as much time for reading as I’d like too, so I’m going to start small and see how far it takes me.  I’ve decided to go for a five-in-a-row (row three, going across).  If you’d like to read the prompt for each square, please check out the sign up thread I’ve linked above.

HEIMDALL, GUARDIAN OF THE BIFROST: Read an LGBT+ book.

Overthrow by Caleb Crain – I lucked out and won this in a giveaway, and the publishers were kind enough to send it ASAP.  This is about a group of friends who develop some special abilities, and have a run in with a security contractor, and the legal and political consequences of that run in.

JOTUNHEIM – LAND OF THE GIANTS: Read a long book.

Imaginary Friend by Stephen Chbosky – 720 pages.  That qualifies as long right?!  This book is already getting some hype, so my explanation is probably not needed, Imaginary Friend is a literary horror novel about a boy who wanders into the woods and returns six days later with an imaginary friend… I absolutely can’t wait for this one, I’m just hoping I can cram it in before the end of September!

ASGARD – LAND OF THE ÆSIR GODS: Read any book you choose!

A Pilgrimage of Swords by Anthony Ryan – Ryan is an author I’ve been meaning to check out for quite some time.  And to be honest, I’m going to need a short book in here because to balance out the long one.  A veteran warrior named Pilgrim, armed with a fabled blade, embarks on a quest to request that the Mad God hear his prayers and absolve him of his sins.

VANAHEIMR – LAND OF THE VANIR GODS: Read an award-winning or nominated book.

Pet Sematary by Stephen King – Nominated for two awards, the Locus and the World Fantasy award in 1984… I watched the movie recently and I am anxious to get started! 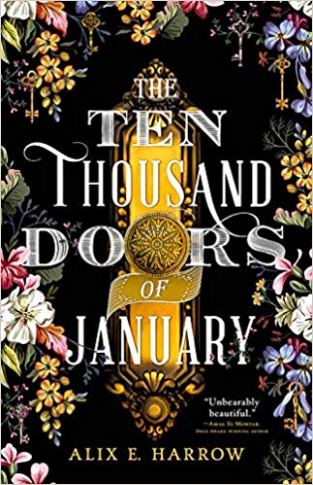 The Ten Thousand Doors of January by Alix E. Harrow – About a girl who finds a book with secrets just waiting to be discovered.  I think.  The blurb is enticing but vague.  Either way- I can’t wait!

Are you planning on joining this readathon?  Leave me a link below so I can see what exciting reads you have planned for September!