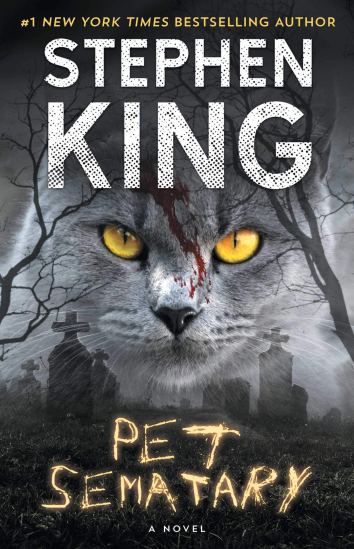 I’m going to write a spoiler laden review here, because this book is older than I am.  You’ve been warned.

Pet Sematary by Stephen King.  That one time, the movie was better than the book.

I can’t believe I just said that about a Stephen King book.  The thing is- most movies based on Stephen King books just suck.  Sometimes, if we’re really lucky, like in the case of The Green Mile, the movie will be at least as good, but I’ve never, ever, said the movie was better. (I’m excluding IT, because I’ve never technically finished reading IT.)

I always read the author notes or introductions or whatever else there is to read in a book.  There was a wonderful little intro to this, a letter from Stephen King to his constant readers, in which he introduces Pet Sematary as the book he personally thinks is the scariest he’s ever written.  The one book in which he felt he might have actually gone too far.

And having already watched the movie, I could completely understand.  Because the movie was fucked up.  In a good way.  I was pretty much stunned into silence at the end.  It did feel like the movie went too far.  It was one of the best horror films I think I’d seen in a long time.

And with the ending in mind, I happily jumped into the book.  I patiently waited through 400 pages of the mundanities (spell check is telling me this is not a word, I’m making it a word) of everyday family life in small town Maine.  And I actually did enjoy most of it.  I liked Louis as a character.  I loved Jud.  I loved the backdrop and the creepy Pet Sematary, and loved knowing how King came to write the novel.

There is very little action in the book.  Sure we get a few glimpses of the horror to come- Church the cat, Pascow’s ghost, the ORINCO truck.  But nothing really happens until the end.  This is the slow burn he’s so well known for.

I think, maybe, if I had read the book before the movie, I might have felt more surprise and more suspense.  I watched Pet Sematary knowing nothing about it.  I read Pet Sematary thinking I knew what was going to happen.  So all the parts where Louis is in the graveyard digging up his two-year old, Rachel forging ever onward to her untimely demise, I get the sense the reader was supposed to be thinking, OMG NO!, but the impact might have been a little lost on me.

What actually happened, is that Louis seems to surface from whatever fever dream possessed him to bring his son back from the dead in the first place, makes a very clear choice to undo his mistake, and then lapses right back into the fever dream.

It almost felt like, to me, King thought, “Oh shit, I’ve gone too far.  I should probably wrap this up.”  And then wrapped it up.  The whole ending, in this 500+ page book, takes maybe 30 pages?  It was disappointing to say the least.

Especially knowing what I know about King’s work.  There are times when it seems like he’s gone too far.  The opening to Mr. Mercedes for example, exploring all the gory and gruesome details of a sociopath driving a car into a crowd of people in need.  Or that short story he wrote, Survivor Type, which I read 15 years ago at my mother’s kitchen table on a sunny summer day and still gives me nightmares.

That being said, though I was disappointed with the ending, I did enjoy most of the book.  And I read through all 500 pages insanely fast.  So- it’s worth reading, sure.  Just don’t read it after you’ve seen the movie.  Or if you can’t wait, just don’t expect the book to match the movie.  You’ll end up a little disappointed.

Pet Sematary can be found on GoodReads or ordered on Amazon.