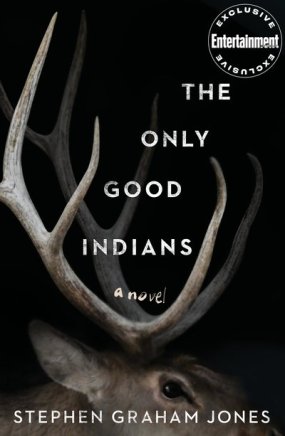 I read SGJ’s Mapping the Interior late last year and was very impressed.  So impressed in fact, that I went through and added just about everything he’d ever written to my TBR.  So of course I was very excited to read this.

The premise is this: ten years ago, four friends embarked on an illegal hunting trip.  They knew what they did was wrong.  They did it anyway.  Now, something evil is hunting them back.

The story started out very strong.  I heard the term literary horror for the first time last year in reference to another book, and that phrase kept popping up over and over again in my head while I was reading this.  There was symbolism, biting social commentary, the imagery and tone were perfect.

There were times in reading this I was genuinely unsure if I wanted to continue- not because the book was bad, but because it was just that dark.  I cherished every single word I read in that first fifty percent.  I cared about the characters, I cared about Lewis’s marriage.  I cared about their friendships and their pets.  If this had been a novella, and had ended after Lewis’s part, I think it would have been damn near perfect.

However, after Lewis’s part, we shift POVs.  And while I enjoyed those parts too, I think the problem was that I was already so attached to Lewis I wasn’t ready to leave him.  I do wonder if I would have enjoyed this a little more if those parts had been switched around.  I don’t think either Gabe or Cass came across as sympathetic as Lewis did, so it was difficult to become reinvested in their story lines after finishing Lewis’s.

There’s a lot of basketball in this story – so the parts of this that talked about basketball I sometimes drifted off.  I’m less than five feet tall and have always been more inclined towards mental gymnastics then physcial ones, so it’s just not my thing, though I think it was used very well here.  Basketball seemed to make up a decent chunk of the second half, so the pace felt inevitably slower, hence the 4 stars instead of 5.

This is very much a supernatural story with a very supernatural ending, so if that’s not your thing this may not be for you.  The horror aspect is brutal and visceral – so consider yourself warned.  It won’t be for everyone.

But if you think you can cope with it- I highly recommend trying this out.  I was even more impressed with this than the last SGJ book I read, and I’m eager to read his other works.

The Only Good Indians released on July 14, 2020 and can be found on GoodReads or Amazon.  Thank you to the publisher and NetGalley for the review copy.

Have you read The Only Good Indians?  What did you think?

17 thoughts on “Book Review: The Only Good Indians by Stephen Graham Jones”