I am not in a reading slump.  If I just keep telling myself it will be true right?  It’s a little difficult to blog about books if you haven’t read anything in two weeks.  However, over the weekend I did force myself to sit down and read the three graphic novels I think I’ve had checked out from the library for, I kid you not, nine weeks. 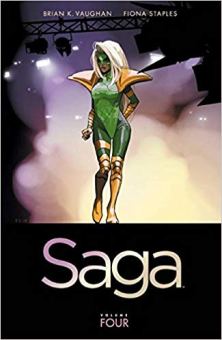 I’ve reviewed a lot of books, and I like to think I leave decent, well-rounded reviews.  However, for whatever reason, it doesn’t translate well to Graphic Novels.  I think because there is less to comment on?

For anyone unfamiliar with this series, Saga is about two people who fell in love while they were at war against each other.  Everyone with a stake in the war wants them dead because it would be bad for people to know that there’s a chance that maybe they could all get along.  To top it off the couple gets pregnant.

I won’t spoil too much about the plot- it’s an interstellar adventure with some very tense moments.  I do think these last three volumes were significantly darker than the first three.  We see the deaths of some characters that I managed to get pretty attached to, and some of the characters arcs take hard turns into the darker side of things.

Along the way we are introduced to a few new characters here and there.  Some of which I enjoyed and others less so.  The representation Vaughan includes is pretty thorough.  There are characters of color and plenty of LGBTQ rep.

Fiona Staples is the artist and her work is amazing.  I love the way she uses color, and it’s always a treat when there is a full panel drawing or concept included.

I did have to wonder a little bit, with Hazel starting kindergarten and all, why the governments are still looking for them.  It seemed to me Alana, Marko, and Hazel would have fallen to the wayside what with the war going on and all.

One of my complaints about some of the previous volumes was that Marko talks in his own language which I’m pretty sure is made up.  That trend continued here.  I still don’t understand those panels, I’m not sure what they contributed, and I’m not sure why they were included.  There’s no other explanation of what might be going on.

All in all it’s a small complaint, and Saga is very much worth checking out.  I’m excited to see where these stories go in the next few volumes.

Can’t-Wait Wednesday is a weekly meme hosted at Wishful Endings, to spotlight and discuss the books we’re excited about that we have yet to read. Generally they’re books that have yet to be released. It’s based on Waiting on Wednesday, hosted by the fabulous Jill at Breaking the Spine.

This is the first time I’ve done one of these posts.  Usually if there’s a new release I’m going to get excited about, I’m the last to know, but I’m currently working my way through all 800 pages of The Priory of the Orange Tree by Samantha Shannon, so I figured I’d give Can’t Wait Wednesday a try.

Description: Yetu holds the memories for her people—water-dwelling descendants of pregnant African slave women thrown overboard by slave owners—who live idyllic lives in the deep. Their past, too traumatic to be remembered regularly, is forgotten by everyone, save one—the historian. This demanding role has been bestowed on Yetu.

Yetu remembers for everyone, and the memories, painful and wonderful, traumatic and terrible and miraculous, are destroying her. And so, she flees to the surface, escaping the memories, the expectations, and the responsibilities—and discovers a world her people left behind long ago.

Yetu will learn more than she ever expected to about her own past—and about the future of her people. If they are all to survive, they’ll need to reclaim the memories, reclaim their identity—and own who they really are.

Why I’m excited for it: The wonderful members of the Sci Fi Fantasy Book Club on GoodReads did a buddy read for Solomon’s other work, An Unkindness of Ghosts, and though I didn’t partake in that particular buddy read, the feedback overall seemed very positive.

I would like to check that one out at some point, but when I saw the description for The Deep I was enthralled by the premise.  It seems like at least some of it will be set underwater, which is one of my favorite settings for books.  The deeper you go, the less the world knows about life under the sea, so it’s always appealed to me as one of those settings where anything could happen.

It seems like it’s going to have merpeople of a sort.  I read Mira Grant’s (Seanan McGuire) Into the Drowning Deep last year and while it read like a B-movie horror flick, that’s sort of my jam, and I enjoyed the ride.  I’m fascinated by reports of the Fiji mermaid, especially those documentaries similar to Josh Gate’s expedition on Destination Truth.

But most of all it’s own voices, and it will explore the world and it’s history from a perspective we don’t get to see enough.  I’ve already planned the buddy read for release day, and I honestly can’t wait.

The Deep can be found on GoodReads here, or preordered on Amazon here.

I’ll apologize, I haven’t been posting consistently.  To be honest, I haven’t been reading a whole lot.  Last year by April I’d probably read 25-30 books.  This year I’ve read 23 things, 3 of which were graphic novels and 5 of which were short fiction pieces.  I have a feeling I won’t make it to my usual goal of 100 books this year, and that’s okay.

I’ve been working on my own novel- which I’ve just about completed a second draft of, and I’m so excited to be putting finishing touches on it.  It’s more or less become my second child (third if we’re counting the dog).  On a side note, if any of my wonderful book buddies would be interested in beta reading even a portion of it, let me know!

The Cortas are the most egocentric, narcissistic, arrogant – outright weird – pack of fucks I have ever met.

These books have come up a few times on this blog, particularly in my Top Ten Tuesday posts, because it’s one of my favorite series.  It’s epic on the scale of Game of Thrones, gory on the scale of Stephen King, clever on the scale of Kaz Brekker, and diverse to boot.  I recommend this series every chance I get.

But that isn’t to say the books aren’t without their flaws.  There are definitely some things I would have liked tightened up.  The primary one being the amount of reading between the lines that’s needed to fully grasp these books.  I happened to read this with buddies, who were wonderfully patient with me, and I like to think I would have understood better if my time wasn’t so stretched and I could really sit down and pay attention, but the truth is you have to infer quite a bit of information from these books.  I had to re-read things a few times to figure out what I was witnessing.

I’ll be the first to tell you I’m really not that reader.  I like books that make me think about life, current events, philosophy, religion you name it, but I’d prefer if the events of the book are pretty straight forward.  This isn’t something I detract a lot of points for, because readers deserve to have books that challenge them.  (As an aside- another beloved series, Terra Ignota is written a lot like this.  Maybe it’s something I like more than I think I do.)

The second thing I would have changed is that, reading this, I felt like a lot of information was purposefully withheld from readers in the earlier books just to make them more suspenseful.  That does annoy me.  One example is Wagner and his “lycanthropy”.  It does finally get an explanation in this book but the explanation was so simple that the big reveal felt very anticlimactic.

Finally, there were some characters whose storylines I hadn’t really invested in in books one and two because their storylines take awhile to get ramped up and they never really felt like the focus.  Those storylines get some pretty thrilling conclusions in book three and I was cursing myself the whole time for not paying better attention to them.  Likewise, I found myself missing some of the characters who were more important players early on and sort of faded to the background here.

But in the end, these books are some of the most entertaining books I’ve ever read.  The world building is solid, and it’s never told in boring info dumps.  It throws you head first into this dark, ugly world with little more than a short dictionary to guide you.  The characters are whole and three dimensional, motivated by their own desires, with unique voices.  They’re colorful and vibrant and pop off the page.  I adore the “heroes”.  I love the justice dispensed to the villains.  I read the last 150 pages almost all in one sitting because the conclusion was so perfect, I couldn’t look away for even a moment.

I’m sad it’s over, but I’m excited to jump into another McDonald book knowing what he’s capable of, and even more thrilled by the possibility of a new series to sink my teeth into.  Perhaps most telling, is that I’m sincerely looking forward to re-reading them all when I have more time on my hands.

And every second I am away from them, it kills me.

Luna: Moon Rising can be purchased on Amazon here.

This is my Review of the Month for the review collection on LovelyAudiobooks.info