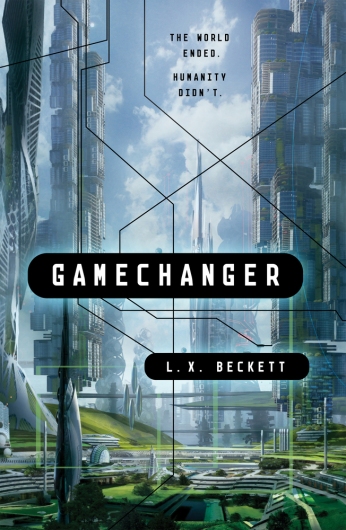 This turned out to be a frustrating read for me.  Mostly because I wanted so badly to love it, and because there were so many brilliant ideas.  Ultimately, I found it chaotic and unsatisfying.

We’re given all these awesome ideas- immediate and public social justice, a world that seems relatively free of judgement concerning race and gender, cool tech, small jobs and volunteer work on the fly, virtual assistant AI, gaming, world wide democracy, etc.  The world building in Gamechanger is almost as impressive as another personal favorite of mine: Too Like the Lightning.

But the plot has way too much going on, and none of it ever seems to come together into a cohesive story.  While I was trying to jot down some thoughts after finishing, I counted about nine separate plot lines, with only about four or five of them being tied together.  I think ultimately it was a book that just needed more planning and a tighter editing.

The conclusion is rushed and messy. I kept waiting for that Aha! Moment to pull all those separate plot lines together – but it never happened.  There never felt like a good reason to have all these separate stories being told together in the same book.  I wanted some clever reveal, the curtain drawn back, the wizard revealed.  Instead we’re left with some silly fairy tale “And they all lived happily ever after” nonsense with no real explanations given.

The world building was definitely my favorite part, but I also wanted to mention it is #ownvoices with queer representation.  If you think you’d like to give it a try, Gamechanger can be found on Goodreads or Amazon.