This week’s topic is One Word Titles.  Titles are rarely what attract me to a book, but they are sometimes intriguing.  So I’m going to attempt to pull the most interesting one word titles out of my TBR. 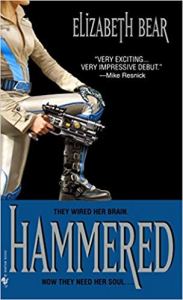 Hammered by Elizabeth Bear – I think this is one of the few I added because of the title.  I think Hammered might have something to do with robotics, but at the same time it sounds to me like the MC might spend a lot of time at the bar… 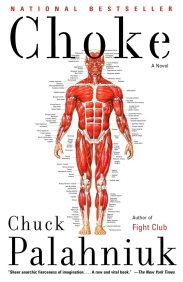 Choke by Chuck Palahniuk – Every time I start talking about Fight Club, someone jumps in and recommends Choke.  I added it more because of the overwhelming number of recommendations I was given, but I still think the title is intriguing.  Who is choking precisely?  Are they choking someone else or choking on something?  Or is this just the sound people make when they try to say the author’s last name? 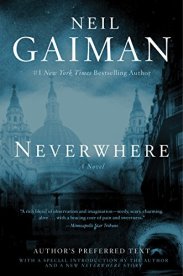 Neverwhere by Neil Gaiman – I love this title because of the whimsy it implies.  It reminds me of Alice in Wonderland- I just imagine all sorts of odd things happening in Neverwhere. 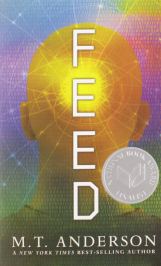 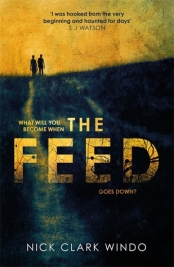 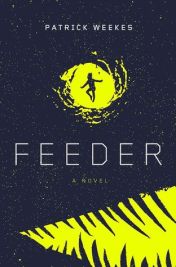 Feed by M.T. Anderson, Feed by Mira Grant, The Feed by Nick Clark Windo, and Feeder by Patrick Weekes – When I was looking through my options for this week’s TTT, the word Feed stood out to me.  I found it in five different titles, one of which I didn’t include here because it was two whole words (and not a fake word like ‘the’ obviously.) 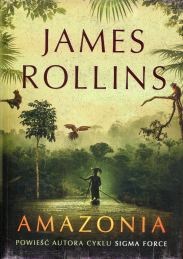 Amazonia by James Rollins – I’ve actually mentioned this book before- but it sounds very Crichtonesque.  Soldier goes into jungle missing an arm, comes back with both.  WHAT IS HAPPENING HERE?  So of course I added it.  But what first attracted me was the title- because I love all things set in a jungle. 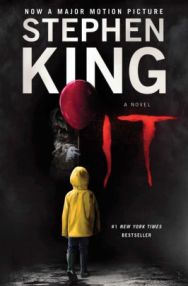 It by Stephen King – One word. Two letters.  King has a lot of one word titles to choose from- but none are so terrifyingly vague as It.  That thing that takes all the forms of your worst nightmares.  It’s lurking in the sewer and in the caves.  You cannot escape It.  It is coming for you.  And most horrifying of all… It’s length. 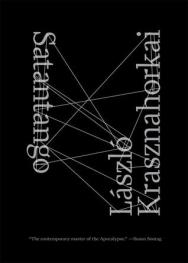 Satantango by Laszlo Krasznahorkai – I discovered this a couple years ago when I was attempting to read more translated works.  It sounds like a small town drama, which are the best kind.  Also- how could you not be intrigued by a title like Satantango?

Cryptonomicon by Neal Stephenson – I think one word titles are difficult to make interesting- but it’s hard not to be grabbed by this word.  I like this title because the word is interesting, invented while sounding real, and manages to give you some clue as to what the book is about.  I’d guess some sort of puzzle solving, but here it’s more code breaking. 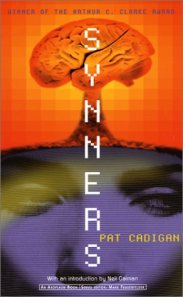 Synners by Pat Cadigan – Synners wound up on my TBR because I was searching for a top 50 best SFF books of all time, assembled from as many sources as I could find.  This book kept popping up as one of the most underrated SF novels out there.  The title I like because phonetically it sounds like “sinners” while visually it reminds me of “synergy”.  I’m guessing the two meet somewhere in the middle. 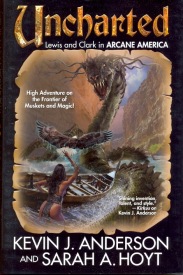 Uncharted by Kevin J. Anderson and Sarah A. Hoyt – This title caught my eye because it shares a name with one of my favorite video game franchises of all times: Uncharted.  That game is more about the explorations of Sir Francis Drake then Lewis and Clarke, but I’m fond enough of the game that I couldn’t let go of the title and decided to go for it.  I’d be lying if I said I wasn’t somewhat put off by the scantily clad woman on the cover.

What do you think of these books?  Have you read any of them?  Which one word titles speak most strongly to you?